Speaking On Stages to Grow Your Business with Pete Vargas

You’re listening to Smart Businesses Do This… in today’s episode, I’m joined by Pete Vargas. Pete has been educating speakers and entrepreneurs about landing stages and winning stages for over a decade. Today, you’ll learn how to grow your business and spread your message through speaking on stages.

Speaking on Stages No One Is Invited To

Adam: Now for everybody listening, just so you know, Pete is one of the most incredible people in the world and I want to share a story about why I think you are so inspirational. One of the things that I’ve done to grow my career is traveling around the world, speaking on different stages.

In fact, I made my debut in 2006 when I was invited to Hollywood to speak on a stage for the first time ever, and I was blown away. I went from literally nobody knowing who I was to later on, that week on a very popular blog in the dating industry.

I was ranked as the third best dating expert in the world, which completely transformed my life. It was huge and it literally built my entire career. If I hadn’t done that, I wouldn’t be where I am today. I remember I was so nervous for a month being like, should I do this? Looking back, I can’t even believe I thought that I wouldn’t do it. You know, it’s so obvious that it was the right choice, looking back on it, and there is one stage that I have always wanted to speak on.

A lot of my friends have spoken on it, Pete, and it’s the Grant Cardone 10X Stage. It’s my Moby Dick. It’s my white whale. One day. I want to stand on that stage and I want to transform people’s lives.

What I love about that stage is everybody that I have seen speak on that stage is someone who I know personally knows Grant, was invited and has worked with him for years. There was one person I saw that went on stage, and I’m like, man, I don’t know how that person’s connected to Grant Cardone.

Then I learned that person actually reached out cold and managed to get themselves the only speaking spot of that kind Grant Cardone has ever given, and Pete, that person was you.

Pete: Yeah, dude, it’s crazy. So there’s a major nugget that I want to reemphasize, you just threw a golden gem out to your whole community and I want them to hear that then I’ll tackle the Grant thing too. But the golden nugget was that he went from nobody, no name, best-kept secret. In Adam’s heart, he probably said, “I’ve got something that can change relationships. I’ve got something deep in me but nobody knows about me.” And one stage…

Speaking on Stages is the Fastest Way to Grow Your Business

I’m being a little funny now, but you’re not the one, you’re the one that everybody’s looking up to. When you do a good job on that stage, literally you go from best-kept secret to the third-ranked. I want people to hear that because I talk a lot about your message getting out there. I talk a lot about the revenues that are generated from a stage, but sometimes I can’t quite get across how quickly it will position you.

So I want to tell you really quickly, Adam, a Genesis story of how this event was created, you know the story. But there was a gentleman by the name of Darrell Scott. His daughter was the first girl killed at Columbine back in 1999. He had this powerful message that he wanted to take into the educational system based on his daughter’s six diaries and our paper called “My Codes, My Ethics, My Codes of life.” And one of my mentors called me and said, “Pete, you’ve got to bring this guy into your town to speak.”

I was a youth pastor at the time and I said, cool. I’ve never heard of him. My mentor Bob’s like just trust me. I brought him in and he spoke to my kids before he got on my stage. He said, “Pete, I feel like I can change the school system. I’m just struggling to make that happen.” I was like, “cool, man, I think you can too, good luck.” I mean, I didn’t have time to be able to help him.

He gets on my stage in front of my kids, my parents, and a thousand people in the auditorium, and at the end of that presentation, he says, “there are five people in your life that you need to let know you love them.

You don’t know how long you’re here with your kids, so I want you to do two things. Either go tell them you love them. Or if you’re not in good standings with them, you go ask them for forgiveness.

The parents in here, your kids in your life, on April 20th, 1999, I had no idea my daughter was going to be the first one killed at Columbine. I had no idea the last conversation I would’ve had with her was the one prior to that day. You don’t know how long you’re here with your kids, so I want you to do two things. Either go tell them you love them. Or if you’re not in good standings with them, you go ask them for forgiveness.”

A couple of weeks later, I got a letter from my dad in the mail. He said, “I’m sorry for the father I was.” My grandmother took me away when I was in sixth grade because of the things my dad was doing to me, raising me as a single dad, and just the abusive dad that he was.

You Can Change Lives By Speaking On Stages

Now, 23 years old, reading this letter and it says, “I’m sorry for the father I was” up in here, “my son is having an impact on hundreds of kids’ lives and I can’t have an impact on my only son’s life. I’m asking you for a second chance to do things right. He loved me for the very first time in a really long time, and I thought to myself, what just happened? One message on a stage changed it all. Same story you said, different situation, but same story. Bam. Elevated. You made people take notice of you. Same thing here.

My dad finally said he was sorry. So here’s what happened. We got that, man. I called him, I solicited him. I said, and this is part of that whole system. I’m leading into the Grant stage, I said, “Darrell, you got to get this message out to the world.” He said, “I’ve been trying, but I don’t know how. Nothing’s working.”

Two things, bright, shiny object syndrome. He was trying to do a bunch of things in a noisy world that everybody else was also trying to do. He wasn’t known. He wasn’t known in the educational system at all. He was known in the media because of the shootings, but not in education. So I said, “you get on one stage” and he goes, “I don’t know how to get on a stage in front of educators. Can you do that for me?”

So I started. I was like, “okay, I’m a youth pastor. I’ll hustle on the side and figure this out.” I started calling, I started emailing, I started sending gifts in the mail, and I started doing everything. There was no social media, so I couldn’t do that. I was doing all of these things and all of a sudden I got somebody’s attention.

I remember her conversation. “Who’s Darrell Scott? There’s a recurring theme here. Who’s Darrell Scott?” And as I positioned to tell her, she said, “I want him on my stage.” She hired him, 400 people in the auditorium, educators who make decisions about bringing school programs back into the schools, and all of a sudden she hires them. We get paid to be on that stage. At the end of that talk, we give away a free gift.

Speaking on Stages leads to people wanting to work with you

350 of them turned in that free gift asking, how can I work with you more? Over the next two weeks, we quickly went to design a program that didn’t exist that day. Over the next two weeks, he generated five times the revenues he had in that organization in the last 12 months. And here’s the crazy thing. Fast forward now, 15 years, and he’s impacting millions of people!

He’s seen a teen suicide prevented daily, a school shooting prevented monthly. And the crazy thing is, everybody knows him. Now they know his message and it all started with one stage. So why do I tell you that the system we created and the system that I taught on Grant Cardone’s stage is a system that literally takes, let’s say “best-kept secrets”, people who have a message for this world.

Build a System to Speak on Stages

I had to create this system, starting with Darrell and a handful of other clients that nobody knew. I had to build a system that wasn’t about showing off their celebrity status or their New York Times bestselling book. I had to build a system around someone who had a powerful message and make sure people wanted to hire them based on that message, not based on their celebrity status.

So, as I thought, at 10X this year, on a stage of 30,000 people, the people were blown away. Then, Adam, you’ll appreciate this, this answers your question. The very last slide that I brought up was a picture of all 12 speakers, Daymond John, John Maxwell, Sara Blakely, Jesse Itzler, Russell Brunson, Ryan Deiss, Grant Cardone, and Elena Cardone. I could go on and on. There were all six on the top and all six on the bottom. Imagine that, everybody picture that.

Then I said, “this week, I’ve been walking around the stadium, my team and I keep hearing-” and then a box goes around my face, on the right-hand side, an arrow pointing to me, with the question “who is this guy?”

He’s the same guy that used this same system to win this stage, that I just taught you to win stages in your life.” I tell that story because I think the Darrell story is an important foundation of I had to build a system over 15 years that really made best-kept secrets noticed. 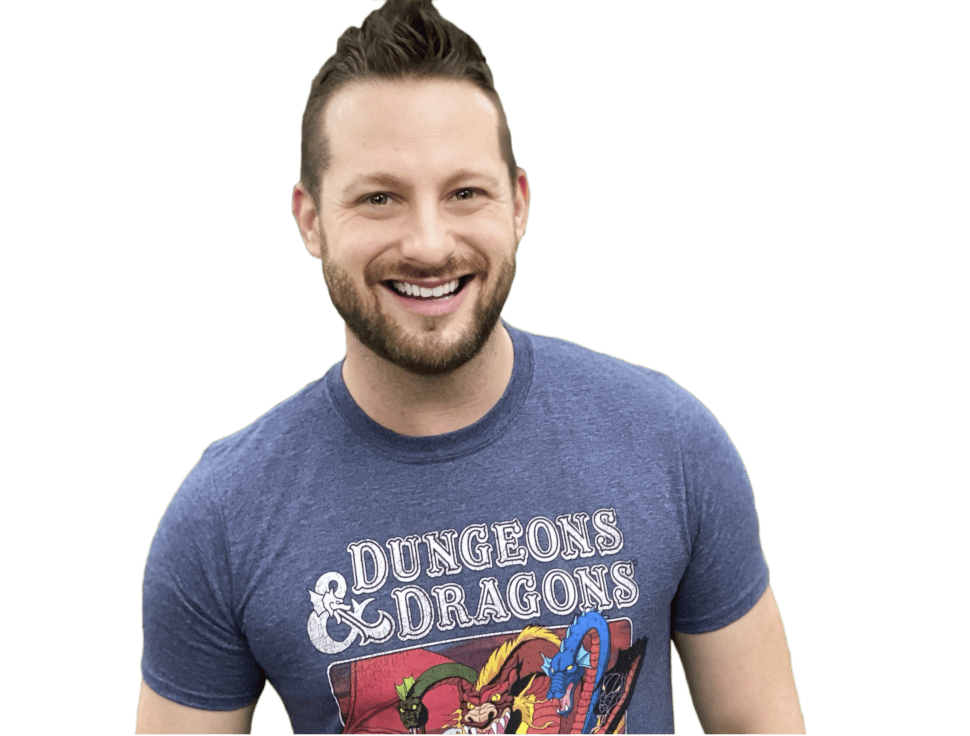